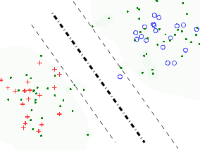 Machine learning is a field of artificial intelligence, which use empirical data to extract characteristic of interest of their unknown underlying probability distribution. Knowledge about a given problem is learnt from examples (training data). This knowledge is implicit, unlike explicit knowledge that can be given by formal definitions or rules. A machine learning algorithm is evaluated on its generalization capability, which is its ability to apply successfully the learnt knowledge to unseen data. Different kinds of machine learning algorithms exist, depending on the goal. Supervised algorithms such as support vector machine (SVM) are used for classification tasks while unsupervised algorithms such as manifold learning algorithms are used to extract the relation between the examples.

Articles in this category

About the Author: admin